Grilling Season is Here – The Secret of Perfectly Grilled Potatoes 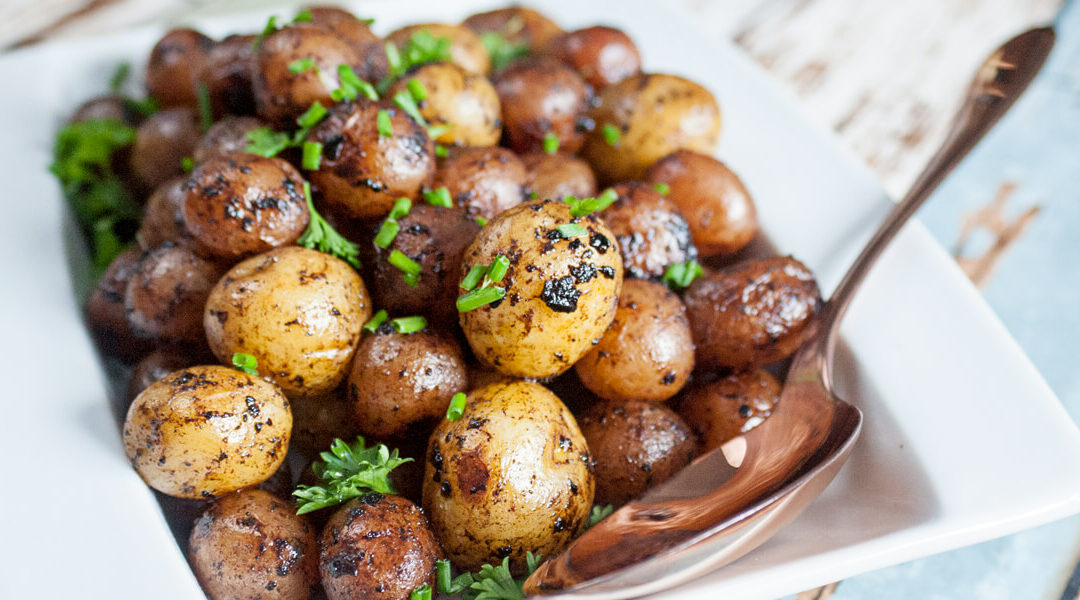 From our friends at Napoleon!

Life is too short not to eat good food. And there is nothing more comforting and delicious than a perfectly cooked potato. This is a barbecue blog, so what do perfectly cooked potatoes have to do with grilling? EVERYTHING! You need to know the secret to grilled potatoes to go with your perfect steak. Keep reading to find out the right kinds of potatoes to use for specific side dishes and the best techniques for results that you will have to taste to believe!

These potatoes are high in starch and low in moisture. This results in a mealy or fluffy potato so fry, bake, or mash these spuds! These potatoes aren’t great for boiling because they tend to break apart or crumble meaning that they’re not so great for roasting either (Which is a total shame!), but they are ideal for thickening soups. 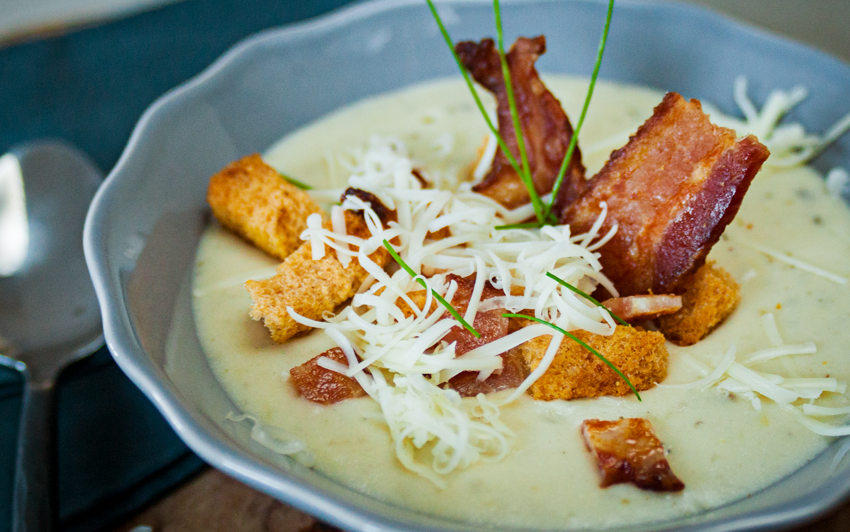 These thin-skinned potatoes are waxy, high in water, and low in starch – there’s a lot of water between cells leading to a creamier texture when cooked. This additional water prevents them from absorbing too much more during the cooking process and they don’t fall apart when boiled. They are not great for frying, but best for roasting, potato salads, stews, soups, and au gratin. 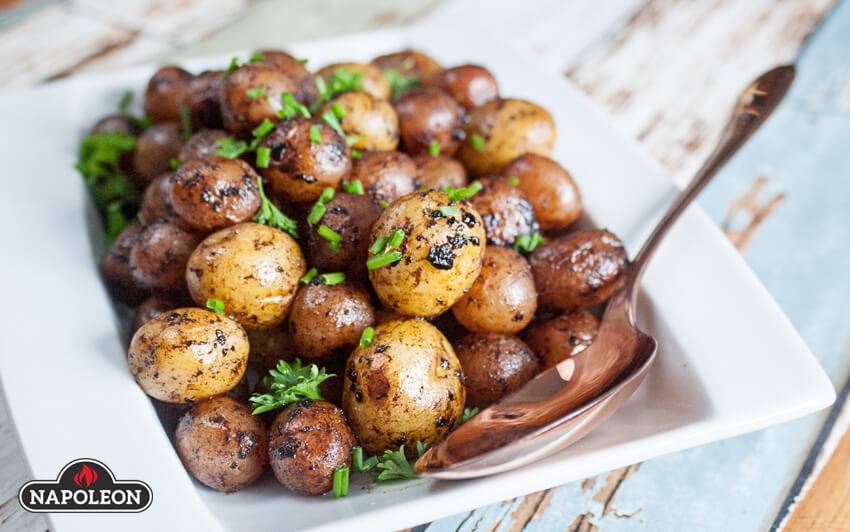 All-purpose potatoes are all-around good for most things. Not perfectly suited for, but will do better than using a new potato for french fries or a russet for potato salad. A lot of people swear by Yukon Gold potatoes because they’re actually good for mashing, they’re not easy to overwork (when you suddenly go from fluffy and dense mashed potatoes to gluey and gross). 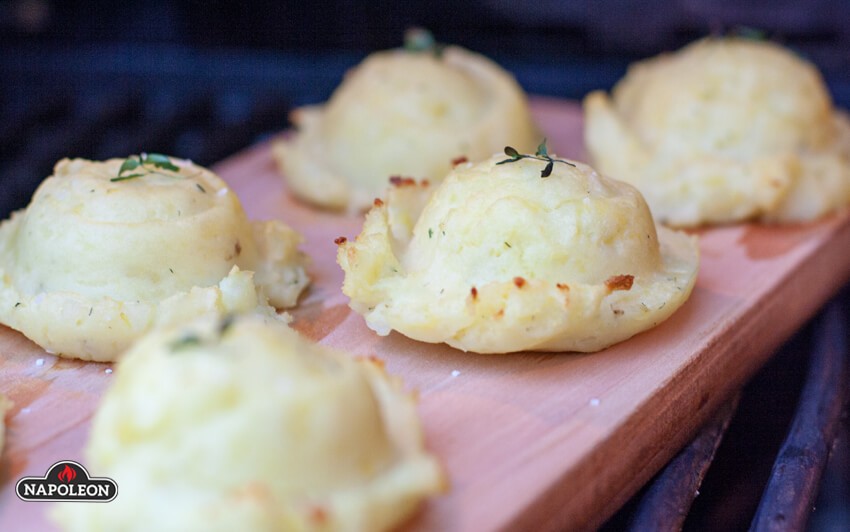 THE SECRET TO PERFECTLY GRILLED POTATOES

The secret to a perfectly grilled potato depends on what you’re doing with it. When you know how you want to cook your potatoes, then you can choose the right one for the job.

A straight-up grilled potato is one that has a crispy outside with grill marks and a light and pillowy or creamy inside. There are three ways to go about achieving these delicious results: 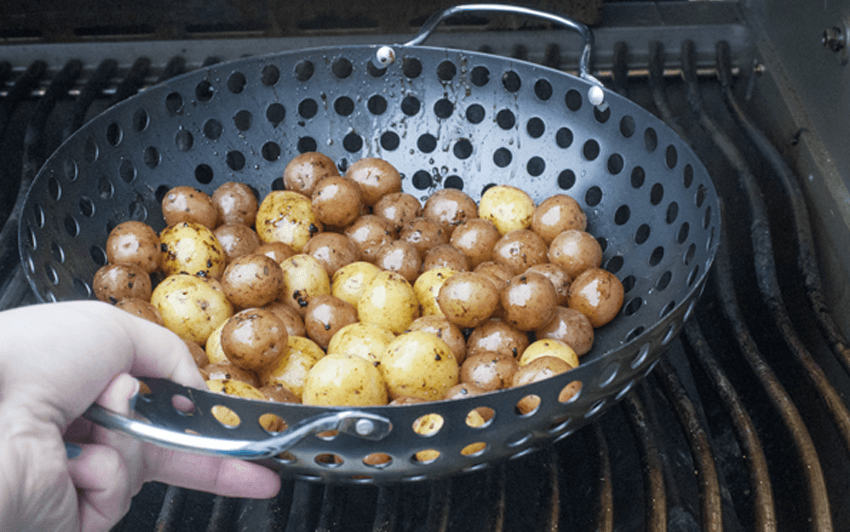 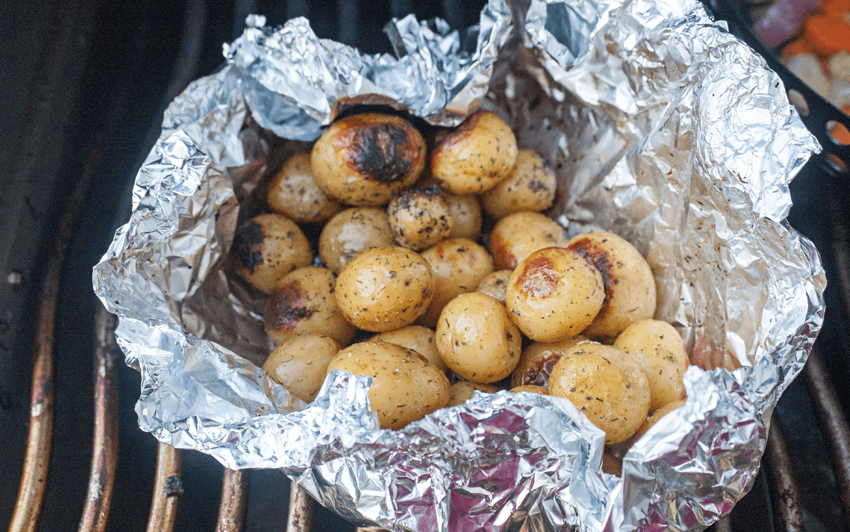 HOW TO BAKE POTATOES ON THE BBQ

Using your grill for baked potatoes (also known as jacket potatoes) just makes them so much more extra. Preheat your grill to between 350°F and 400°F using indirect heat. Grab a good starchy potato, your supermarket will have them labeled baking potatoes, but a Russet or Idaho will do. Pierce the potato eight to ten times with a fork, not too deep, then brush with butter or oil and sprinkle with salt. Place the baking potatoes on the warming rack or on the cool side of the grill to bake for 60 minutes. The skin will be deliciously crispy, while the insides are fluffy and succulent.

How to set up your BBQ for Indirect Grilling

Twice baked potatoes are an amazing amalgamation of mashed potatoes and baked potatoes. To make them, bake your potatoes like normal, but when they’re done, using heat-resistant BBQ gloves, slice off the top and scoop out the cooked potato, being careful not to damage the skin. Once you have scooped out the insides, you can mash or mix them with your favorite potato things like butter, dill, chives, bacon, cheese, and sour cream. The possibilities are endless. Take the potato mixture and fill the potato skins once more, placing them onto the grill in the same place and baking them for another 10 to 30 minutes, or until heated through and slightly crispy on top.

HOW TO ROAST POTATOES ON THE BBQ

Yes. You can make the best, most perfect, roasted potatoes on your grill. You want to choose a starchy potato, like the ever-useful Russet, though Yukon Golds are great here too. Peel and cut the potato into quarters or sixths – but no smaller than 1½ inches. Fill a pot with cold water to cover them by about 1 inch, bring the water to a boil and parboil the potatoes for about 10 minutes. While they’re boiling, preheat the grill to between 350°F and 400°F, preparing to use indirect heat. Now the secret to perfect roasted potatoes is to drain them, then put the lid onto the pot and give them one or two good shakes. You want to scuff the outsides up a little so there is more surface area, but not disintegrate the potatoes (they will crumble if overcooked). Gently toss the potatoes with melted butter and salt to taste. Add a little butter or oil to a baking sheet and lay the potatoes out in a single layer. Roast on the grill, using indirect heat for 30 to 60 minutes, or until they’re crispy and golden. You can flip them once or twice if you want. Just remember to add extra potatoes to the recipe. They’re THAT good. 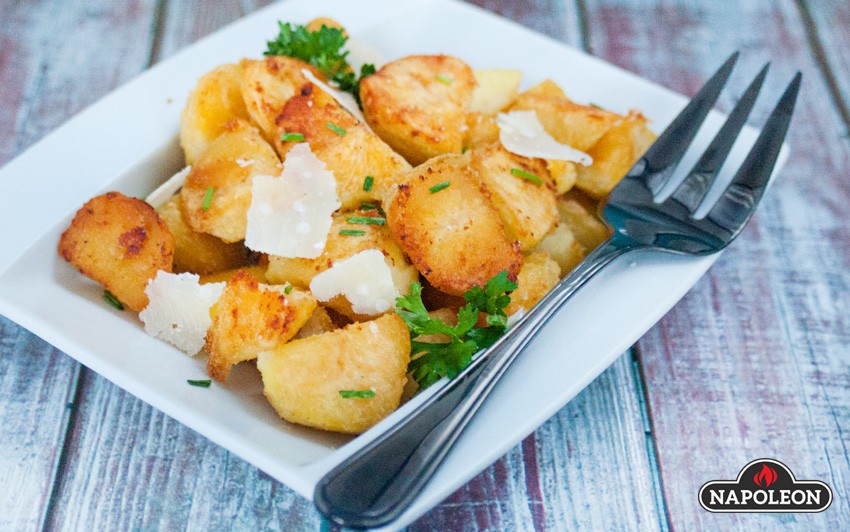 Recipe: The Best Roasted Potatoes Ever!

Remember these tips when you get your potatoes to make sure you get the best from them each and every time: 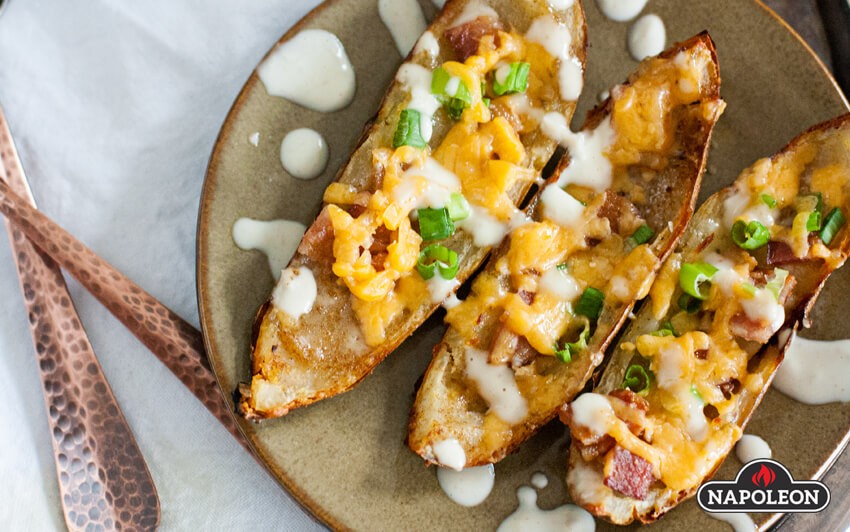 Just when you thought potatoes couldn’t get any better you decided to use the grill to cook them, and if you followed the secrets outlined in this blog, you will be eating the best potatoes of your life. There are few meals that can’t be made better by adding potatoes as a side dish, but what is your favorite way to prepare potatoes? Tell us or show us on our Facebook and Instagram pages using the hashtag #perfectGrilledPotatoes.

To read more check out the Napoleon blog here!